Some cats are known to develop an unusual knack towards certain fruits, cantaloupe being one of them. No worries if your feline is a cantaloupe fan, as you can give it a morsel of this fleshy fruit at times. Ensure to take out the peel and seeds before serving it to your cat. 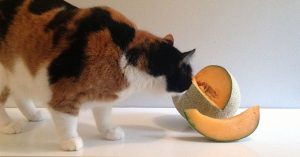 Though a strange and unusual liking indeed, there may be umpteen reasons behind their love for cantaloupe, a primary one being its smell. In fact, a particular study suggested that the aroma of this fruit is mainly because of the volatile oils obtained from amino acids, the same component which is also present in meat. Cats might get attracted towards it since they find its smell similar to that of meat.

Is cantaloupe good for cats

It is rich in a whole lot vitamins (A, B, C, and K), minerals (like magnesium) as well as dietary fibers. However, this would not do much good to your cat considering the small amounts of it they can have.

Can cantaloupe be bad for cats

Though it is not poisonous, some might not be able to digest fruits well due to its carbohydrate content, resulting in stomach problem alongside other intestinal concerns. Moreover, consumption in excessive amounts may even hurt your cat’s tummy.