Your cat would ideally not be interested in the veggies you have on your platter, considering the obligate carnivores they are. However, if they happen to pounce upon a plate of celery fry lying on the dinner table, there is not any cause for panic as this leafy vegetable in moderate amount is safe for them when eaten once in a while. Though the leaves and stalks are often munched by cats, try giving it celery in its cooked form to ward off any hazards. 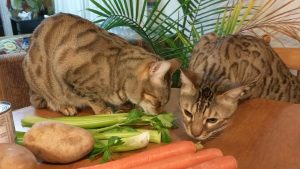 Some cats are known to have an undying fondness towards celery leaves, treating them in a similar way as catnip. The sigh of the leaves may make them so excited that they pounce upon it instantly, rubbing their faces, drooling and even trying to roll themselves in it. The actual reason behind this is unknown, however this trait is not seen in all of them.

Cats and celery: How is it good

Though it cannot benefit the cat wholly considering the small amount of it they can have, including it as a part of their diet alongside other measures when they are suffering from stomach ailments would help them recover quickly.

Can celery be bad for cats

It would not harm the cat lest they consume it in increased amounts, leading to diarrhea and other stomach ailments.