A box of pink fruits lying in a basket, may not take long to attract your cat’s attention, prompting him to make a leap and grasp at it. Well, before you panic seeing your kitty attacking a box of raspberries, it would relieve you to know that they are safe for your pet when given in small numbers once in a while.

You can give it fresh raspberries or even frozen ones on hot summer days as a reward for being good, though ensure that the seeds are taken out to avoid any digestive disorders. 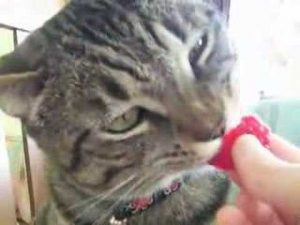 Though it might differ from one feline to the other, the bright, vibrant color of the fruit, alongside its fresh aroma, might attract them towards it.

Are raspberries good for cats

Raspberries are loaded with antioxidant properties, besides being an active source of vitamins (A, B, E, K), dietary fibers and minerals (copper, manganese, potassium, magnesium).

However, considering the small amounts in which they should be given to cats, they would not be of much use to them apart from satisfying their taste buds.

Can raspberries be bad for cats

Though they are not poisonous, excessive consumption of the fruit may result in digestive ailments like vomiting and diarrhea. If you spot your cat behaving abnormally after eating raspberry, do not delay in contact a veterinarian.