The answer is Yes – bacon cut, bacon grease, rind or jerky are okay for cats, BUT YES – only in moderation or as an occasional treat.

Your kitten might get the smell of your breakfast bacon dish and always crave for a bite or two, but as a responsible cat owner, you must put restrictions on your cat’s diet. You should remember that a fat cat may look cute, but they do not stay healthy in the long run. So, use it as a celebratory food if only your cat loves it.

Is bacon good for your cat

Cats are carnivores, and their biological systems have entirely evolved from that perspective. Hence, bacon, being meat, is good for your cat. Other than fat, it has high protein content (approximately 3 g/slice) and does not also contain carbohydrate that will upset your cat’s stomach.

You might also opt for bacon flavored cat foods since these are said to be relatively safer for your felines. 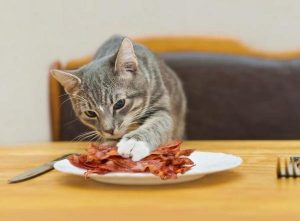 Points to remember while feeding your cat with bacon

Though bacon does not cause any immediate harm to your cat as xylitol or onions do, its ill effects might show up in the long run, if consumed regularly. To avoid that, remember the following points:

Published on December 2nd 2017 by admin under . Article was last reviewed on 2nd December 2017.