Can Cats Eat Pork: Is it Good

Most cat owners shy away from giving pork to their pets, the simple reason being that of all the meats this one may do the maximum harm. However, though this meat may not be the best option for your pet, it is probably not as bad as you think it to be. Giving it little amounts of cooked pork as an occasional treat would not cause harm to your kitty. 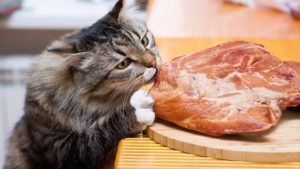 Cats and pork: the common myths

There are lots of myths and apprehensions regarding giving cats pork, some of which might be partially correct, though most don’t seem to hold true. Some of the common beliefs regarding pork circulating among most owners are as follows:

Can pork be bad for cats to have

Pork can be harmful if eaten in excessive amounts since its high content of fat would hamper your cat’s overall health. If your pet shows symptoms of allergies after eating even a small amount of pork, then talk to the veterinarian at the earliest.

If you still fear to add pork to its diet, then replace it with other food items like chicken and turkey which is low in fat but will make up for their protein requirements.