Can Cats Have Soy Milk

NO! Soy milk is not a good or safe thing that you can give to your kitty even though it seems to have an affinity for it. Most felines are fascinated towards milk particularly those like soy since they have flavors of almond, vanilla, etc.) So, it is advisable that you do not indulge your cat in drinking it, even when you see it’s roaming around to get a treat from you.
Let us analyze why. 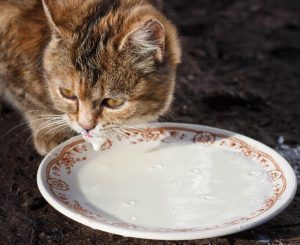 Can Cats Have Soy Milk

Why is it bad for cats to drink soy milk

Apparently, soya milk seems to be a good substitute for regular milk (cow/goat). However, this is a myth. Though it is true that, unlike animal milk, soya milk does not contain lactose, other components might not prove to be suitable for either the adult cats or the kittens. In some cases, it might even lead to severe liver and thyroid trouble in them. Here go the reasons:

If your cat has developed allergic symptoms after having even a small amount of soya milk call the veterinarian at once or contact the ASPCA helpline at (888) 426-4435.

Published on December 5th 2017 by admin under . Article was last reviewed on 5th December 2017.