Not seeing a Scroll to Top Button? Go to our FAQ page for more info.
Home > USA Cats > Balinese Cat

An excellent combination of intelligence, humor, and cuteness, the Balinese with a pleasant personality is a long-haired variation of the Siamese, noted for their soft, and silky coat. Though named as the Balinese, they have no connection with Bali or any other Indonesian region.

There is little information about how these cats originated, with speculations made that they may either evolve because of a natural mutation of the Siamese or even be a result of crossing the Siamese with other long haired felines like the Turkish Angora or the Persian cat.

Their development had probably commenced when the Siamese litters, few carrying the long haired gene migrated from Thailand to the United States and the United Kingdom in the middle part of the 1800s.

At first, the Siamese kittens with long hairs were not eligible as show cats in the US until 1928, thus mostly sold as pets.

With the initiatives taken by a few breeders of different catteries, the Balinese gradually received the status of a separate breed altogether.

Breeder Helen Smith (Merry Mews Cattery, New York), developed an immense fascination for the long-haired Siamese, giving them the name Balinese as their elegance reminded her of the graceful movements exhibited by the Balinese dancers.

Another breeder, Sylvia Holland (Holland’s Farm Cattery, California), bought the Balinese kitten, Sputnik to her cattery that also went on to become the foundation cat for several Balinese at present. However, cats with lilac, blue, seal and chocolate points were only recognized by her as she felt that the other colors were not truly from the Siamese but crosses of other breeds too.

Following the footsteps of their Siamese ancestors, the Balinese were also divided into two groups, the traditional cats with a heavier body stature, later developed into the Thai cat and the modern ones with a slender, elongated body, gaining popularity in cat shows.

Color description of a Balinese Cat

The kittens develop color variations once they are four weeks old, and the shades get deeper as they grow old. Those dwelling in warmer regions possesses coats of a lighter shade than the ones thriving in the cold regions. The kittens mostly have cream or pure white color at birth with points eventually developing on their feet and toes.

Their color points are depicted by the color of their paw pad that is pink for lilac and chocolate points and dark for seal and blue points.

Cat associations like the CFF, accept Balinese with chocolate, red, blue, lilac, and cream points alongside lynx and tortoiseshell patterns.

Balinese are set to be hypoallergenic cats, causing minimum allergies in people unlike other long haired varieties as they produce lesser amounts of protein allergens (Fel d1 and Fel d4). However, extensive research is needed to confirm their hypoallergenic qualities.

Personality Traits of a Balinese Cat

Who is the Balinese cat good for

These minimal shedders need little grooming, sufficing with brushing once a week. Bathe your Balinese when it gets dirty. Other grooming needs include cleaning its ears, brushing its teeth and trimming its nails.

Though it is a healthy breed, it has the chances of being afflicted with the common health issues of the Siamese. Some of them include amyloidosis (protein deposition in the liver or other parts of the body), congenital heart ailments, crossed eyes, gastric diseases like megaesophagus, lymphoma, nystagmus (an involuntary neurological problem where the eyes move in an uncontrolled way) and hyperesthesia syndrome (a rare skin disease).

These intelligent and flexible cats may be trained to perform a host of exciting tricks like jumping through a hoop, doing a paw shake, crossing small obstacles like a box kept in the living room, jumping onto a couch or cat tree or even playing a musical instrument that you have like a drum or piano. Positive reinforcement techniques would make the training process easier.

A major concern of the Balinese is its vocal nature and continuous meowing. To calm it down you should be indifferent every time it gets vocal as it is doing so to grab your attention. After it sits quietly you can reward it with its treat which will make it gradually realize that it gets awarded for keeping quiet. However, every time your cat is crying try figuring out what it wants so that you can attend to it and quieten it.

These cats need a good quality cat food alongside a diet rich in protein and other nutrients. They are also fond of canned food that can be given in moderate amounts. 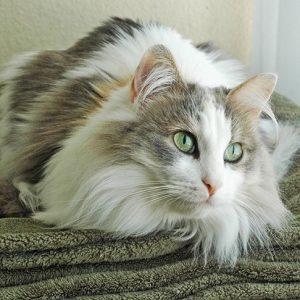