Known as the Poodle of the feline world because of its pleasing personality and soft silky, rippled hair, the Devon Rex is a unique cat with a fascinating disposition. Its impish eyes, oversized ears, and mischievous face make this close cousin of the Cornish Rex a perfect embodiment of cuteness, excelling greatly as a reliable and amicable family pet.

These cuddly cats of the latter part of the 20th century seem to be a new addition to the feline world. The story behind its origination is indeed an interesting one somewhat similar to the Cornish Rex. Miss Beryl Cox, a resident of Buckfastleigh, Devon, played an instrumental role in the development of this breed.

In fact, a domestic curly-coated male cat, dwelling in a tin mine, mated with Cox’s pet white cat that had a tortoiseshell pattern. The outcome was a whole litter of which one of them stood out from the rest as it had a black body and a curly coat just like its father.

Naming it Kirlee, Cox initially felt that it had similarities with Kallibunker, the first cat of the Cornish Rex, thus revealing this fact to the Cornish breeders with the hope that her pet might contribute to their breeding program. However, when Kirlee was cross-mated with female Cornish Rex kittens, the offsprings produced were devoid of the wavy coat, hence proving that both the breeds had different genes. Breeders, therefore, went on to conserve the Cornex’s and Devon’s genes as Type 1 and Type 2 respectively.

Kirlee, the founding stone of the Devon breed, unfortunately, succumbed to a car accident in 1970. Reaching the USA in 1968, it attained recognition by the Cat Fanciers Association in 1979.

Coat of the Devon Rex

Devons are gifted with a soft, full coat with loose curls devoid of the coarse guard hairs unlike other cats, though the texture may differ from one feline to the other. Some cats may display a velvety coat with thin curls, smooth and fluffy enough to run your hands through.

Who is the Devon Rex good for

The Devon has soft, delicate hair on its head, chest, neck, and abdomen, which needs a simple hand brushing as rough handling may have the risk of breaking them. If you want to use a comb, then opt for a smooth one with soft bristles. Bathe it when its skin gets greasy or dirty, though its coat is quick enough to dry after a wash. Brushing its teeth on a weekly basis, cleaning its ears and eyes using cotton balls or a damp cloth as well as keeping its litter box clean are the other hygiene measures you need to adopt.

Though a healthy breed, some of the common diseases it is said to suffer from are patellar luxation, congenital hypotrichosis (hereditary baldness), hip dysplasia and hypertrophic cardiomyopathy (heart ailment).

These intelligent cats being fast learners may be taught a host of new and impressive tricks to perform at home and amuse the inmates as well as to display at cat shows. Since it has a slender, flexible body, your Devon may be trained to walk on his twos. Channelize its undying love for food and hold its favorite treat right on top of its nose. Keep on playing with his treat for him to get up on both his legs properly. Repeat this on a regular basis until he has mastered the art with perfection.

The weird and excessive eating habits of these cats should be kept in check to avoid obesity and other health issues. Give them measured amounts of dry cat food alongside foods rich in vitamins, proteins, and minerals. 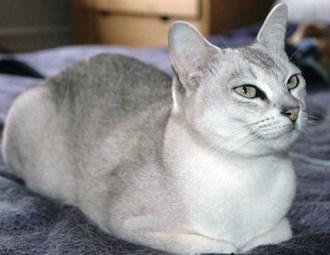